Know Your Como: Putting the World into Words

Know Your Como: Putting the World into Words 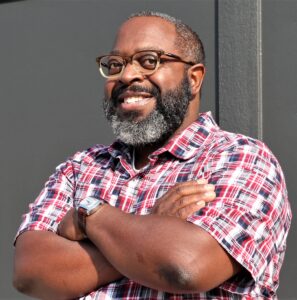 Putting the World into Words

Among the great things about our neighborhood are the hidden gems scattered throughout; we just need to take time to find them. One of those gems: an exceptionally talented poet, literary critic, essayist, and teacher. His name is Michael Kleber-Diggs.

In addition to commenting on events; writing poetry; teaching creative writing at colleges, high schools and Minnesota prisons; and publishing a collection of poetry titled “Worldly Things,” Michael is a husband; a dad to his daughter, two cats, and two dogs; and a neighbor.

He has lived in Como for about 16 years with his wife, Karen; she is a tropical horticulturist and orchid specialist at the Marjorie McNeeley Conservatory (the author’s dream job) – and probably deserves a profile of her own! Both Michael and Karen are immensely proud of their daughter, who is studying for dance performance at the State University of New York-Purchase, just north of New York City.

Discovering the world nearby

The Kleber-Diggs live close to the Streetcar Station – a great location, Michael says, because he can see the Conservatory from the top floor of their house and Karen can walk to work most days. Michael and I met in the typical way one meets new people during a pandemic: Zoom. We both agreed that being forced to slow down is one of the few positive things to come out of this lockdown.

“In the before times,” Michael said, “I worked, volunteered, attended literary events, taught workshops, and was very busy. I was never able to walk my dogs much. Once the lockdown happened, I was able to work from home, I had more time, and I was able to walk the dogs around the neighborhood. And I was able to meet people that I have lived by for the last 10 years. Being confined helps you get to know your neighborhood. I would be out walking and sometimes people would recognize me and comment about a poem or an essay I had just posted. It makes you realize that people are doing so many creative things within just a mile radius around you, and you would never know unless you took the time to look for it.”

Michael has written poetry for 20 years; it is something he says he will be connected to, practice, and learn about for the rest of his life. But his soon-to-be-published book is his first – and it won the Max Ritvo Poetry Prize for a debut collection. Milkweed Editions publishes “Worldly Things” in June (you can order it here).

Beyond his poetry, Michael shares ideas and perspectives on his social media accounts and website. He started blogging essays in 2015 as a way to respond to and analyze events in the world and in his everyday life. He approaches his essays in two ways: “The first is to be very intentional in regards to the craft of writing; they are very edited, with an intention of where I want to send it, like Literary Hub or to Minnesota Artists. But mostly, I like to focus on the idea and put it out there, to be present so the reader takes away the idea he has and is not caught up with the writing style.”

He finds inspiration for his writing from his daily travels and in “moments, images that captivate me just as I go about my daily life. Being a Black man, race is a reality that I deal with, and I want to discuss race.” His book starts with a poem in St. Anthony Park and ends in Como. The first poem is about picking his daughter up at Murray Middle School and seeing a student in the back seat of a police car. The last poem is about Michael walking around Como and having an encounter with a woman who is wary of him.

“I want to talk about race. I want people to slow down, think about things differently, and see the world from the vantage point of a Black person in America. Especially if that is a vantage point that they do not inhabit.”