Know Your Como: No Rinky-Dink Endeavor

Know Your Como: No Rinky-Dink Endeavor 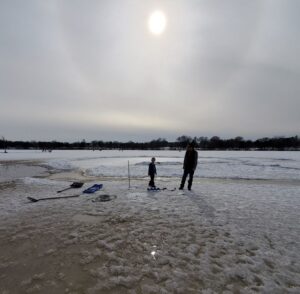 Howling with coyotes at midnight while skating on Como Lake is one of the recent ways Tim Silverthorn has enjoyed his neighborhood of 20+ years. Tim, along with a few other District 10 neighbors, helped maintain a do-it-yourself ice-skating rink at Como Lake this season.

“Our family usually skates at Chelsea Heights Elementary, but this year they don’t have [a rink],” Tim said. “I had heard on the Como Park Neighbors Facebook group about a rink on the lake and I went to look at it. That rink was right off the end of the point and it was adorable. The perfect size for skating — if you are a garden gnome.”

A larger rink sprung up near that one. He doesn’t know who initially formed the rink, but Tim started pushing back the edges, expanding the space even more. He shoveled, patched divots, kept the ice clear, and watered the rink.

“I took six, five-gallon buckets of hot water in my small SUV and I put them on a sled three at a time to bring them down to the lake. I poured as I walked and took a deck broom to smooth the ice.”

Soon enough, a nearby neighbor took notice and offered his homemade “trash can zamboni” (hard to describe but familiar to many Minnesotans). For Tim, this made all the difference: “This neighbor did the most work and truly put the polish on the surface.”

Tim grew up in Michigan, the youngest of six kids. It was there he learned how to skate on an irregular patch of ice in his backyard. “I had those weird skates that nobody should ever use that have double runners that clamp onto your shoes.” Tim has been skating ever since.

Today, he enjoys pickup hockey games with local college students and skating with his kids. It is his kids who inspired him to get involved with creating this season’s Como Lake rink.

“Both of my kids are self-conscious skaters. There is plenty of ice at North Dale Recreation Center and Langford but, for my kids, it isn’t ideal.” Without the Chelsea Heights rink for an option this year, Tim wanted to make a place for his kids to skate comfortably.

“A little bit of magic“

What he helped create is a space for our community. During one of Tim’s skate excursions on the rink he helped build, he witnessed a mom teaching her 5-year-old how to skate, a small group of 30-something friends at a meetup on the ice, and an immigrant family in boots enjoying the ice. It is, as one skater shared, “a little bit of magic during a pandemic winter.”

“You have all different kinds of people that have been coming down to skate,” Tim said. “The lake is Como Park’s center, both figuratively and literally. It is no accident that it happened this year.”

For now, the rink is what nature makes of it. When asked what’s next, Tim said his short to-do list includes securing a new pair of skates; he had to retire his 30-year-old skates after the last time he was out. “Ironically, the skate guy is skateless at the moment,” he joked.

View More Know Your Como Stories
PrevPreviousKnow Your Como: And the Ant’s Name Is…
NextBig Changes Coming to Route 3Next