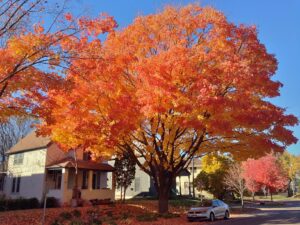 It was a search for a new home that brought most people to the United States, but their fight for a roof over their heads didn’t end when the tempest dropped them on our shores. Across the American landscape, clashes erupted where one people tried to start homes in places that millions already called home. Such is the story of the house my wife and I bought our first year of marriage, a house built in 1886 by Lake Como, back when some could probably remember the area as it once was: home to the Dakota. They lived in villages on the Mississippi, Bde Maka Ska (formerly Lake Calhoun), and Lake Como. The neighboring Ojibwe also considered the area theirs, and for generations the two tribes struggled with each other for possession. Then came the wasi’chu, a Lakota and Dakota word for a non-indigenous person, and similar to a word which means “taking the fat.” With the Whites came treaties, then broken treaties, and finally expulsion to reservations. The first white settler on Lake Como raised cattle and potatoes. The next, Henry “Broad Acres” McKenty, bought up most of the land around the lake for development. Using $6000 of his personal money, he built a road to the lake from St. Paul12, wanting to put up a hotel overlooking the lake. Hard economic times took their toll, however, and unable to recoup his losses, he committed suicide. After that the lake road fell into what the Chamber of Commerce referred to as the “Swamp Route.” Eventually, more people were attracted to Como’s beauty, building hotels along its shore in the area where the pavilion now stands. One hotel, the Aldrich, had a lookout tower, bowling alley, and merry-go-round.

It’s Lake Como now, but before McHenty changed the name it was known as Sandy Lake. According to legend, Native Americans before him knew the place as Me-de-wa-ka, or Lake Mysterious.3 Because the area on the west side of the lake was developed by a man named Cary Warren, this area began to be known as Warrendale. Sections were divided and named, and Ramsey County Lot 6, Block 6, Warrendale was eventually purchased by S. J. Rice. In 1886 he built a modest colonial style house that 125 years later would be purchased by my wife Brigid and me. Situated at the southwest corner of the lake, you can see Chatsworth Woods (aka The Wedge) and Lake Como from nearly every room in the house.

In 1886 railway depots were built in the mostly undeveloped Como area making the lake and park accessible to the masses, including Warrendale, where our 1886 House was one of the first homes built. A few years later a short line was built between the lake and downtown St. Paul, making Como a leisurely half-hour ride for crowds of up to 20,000. When the street cars came, the line went right in front of our house. Only recently were the old tracks underneath Chatsworth Street dug up and removed.

The first owner of our 1886 House was Soren Rice4, who emigrated in 1881 from Denmark. According to the 1910 Census he was married to Johanna, and their children were Frederick, Harry, and Lillian. Their ages in 1886 would have been approximately 23 (Soren), 20 (Johanna), and 2 (Frederick). Harry and Lillian would not have been born yet. On June 7, 1904, The Saint Paul Globe reported the death of William Rice, age 18, resident of our 1886 House. Assuming this to be another child of the Rice’s, his approximate age would have made him the second born child. So far no records have been found to shed light on this death, nor have any records been found to indicate any other deaths at this address.

With the rise of streetcars—first horse-drawn and later electric—Como’s remaining vacant lots filled with houses, and the area soon became a part of Saint Paul proper. Our 1886 House changed ownership several times over the years.  One of the more colorful owners was Rose Ledegar5, who maintained a store on East Seventh Street in St. Paul6, which sold confectionery and cigars. An incident happened on the afternoon of March 17, 1898 involving a peddler named Ole Framstad7 and a dispute over some tobacco. Into the fray bolted Rose’s bulldog, leaving Framstad badly bitten by the savage canine—the city hospital reported lacerations in several places, particularly severe to his calf and thigh—as well as a torn wrist and an eye swollen shut from a pummeling given to him by Rose. Rose, her husband Charles8, and the dog were arrested and locked up, the bulldog kept in a separate cell and kept as evidence. The Saint Paul Globe reports the dog incident occurred after a “dispute over the payment for a piece of tobacco,” but the following September 9, 1900 news article may cause one to imagine an entirely different story:

This was not a solitary nor first incident. At other times Ledegar was accused of conducting a “house of ill fame,” and in 1898 three policemen in citizens’ clothes were sent to the store, where Rose and another woman—Mable Warner—made “improper proposals” to them. Even this had not been Rose and Mabel’s first arrest. The month before, Rose was charged with “keeping a disorderly house” and Mabel for visiting the place.9

Immediately prior to our purchasing the home, the 1886 House belonged to a married couple, he a college professor and she an alternative healer. She left for us a piece of her father Warren MacKenzie’s pottery as well as a few boxes of record albums. One notable surprise was Southern Prison Blues: All Titles Recorded at Louisiana State Penitentiary, Angola. Recorded in 1959 at our nation’s largest maximum security prison, the songs are sung with little accompaniment—sometimes just a 12-string guitar—with voices hoarse and raw. Whenever I play it, the music serves as a reminder of a collective past that isn’t always happy or ideal, but one that is still worthy of our inquisitive and appreciative ears.

1Como was outside the city limits then.
2Roughly the same stretch of land as today’s Como Avenue.
3From information found on Comowoodland.org, as researched by Sharon Shinomiya.
4Unfortunately, not the same Rice that Rice Street and Rice Park are named after.
5Rose Ledegar’s name is found spelled both Ledegar and Ledeger depending on the source.
6Newspaper stories—and they abound—constantly change the address of their store including 352, 351, and 851 E. 7th.
7In various reports on the incident, the man’s name is spelled Farmstad, Farmstat, and Framstad.
8Charles was later acquitted when it was found he wasn’t in the store at the time of the assault.
9The last line of the news story tells us, “The Ledegar woman is a familiar figure on the streets of St. Paul, riding a beautiful bay horse.” In doing research for this essay I found the original building permit for our 1886 House, which includes a permit for a stable (which has since been replaced with a garage).