Know Your Como: And the Ant’s Name Is…

Know Your Como: And the Ant’s Name Is… 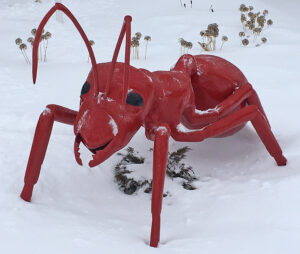 After much debate, the Czarnezki family has agreed upon a name for the larger-than-life red ant that resides in their front yard at 919 Nebraska Ave. Henceforth, she shall be called Marie ANT-oinette.

Yep, same as the French queen who literally lost her head during the French Revolution. That’s the name they selected from among the more than 40 suggestions received from friends and neighbors who responded to the Como Community Council’s “Know Your Como” invitation in January to “name that ant.”

“I knew it needed to be a name that leaned female,” says Kim Czarnezki, “since one of the entries taught me that most ants we see are female.”

“Cool!” thought Czarnecki, who had to mediate the final naming decision because, as she says, “That’s what moms do.” Ant Bea was the runner up, she says, because the family’s gardening goal is to create a bee-friendly front yard.

Other Czarnecki favorites included Ant Arctica, Antchovy, and Bugsy. Sam Czarnecki, 9, and his brother Max, 5, lobbied hard for Big Red and Anty McAntface. Albert Antstein and Ulysses S. Ant also were in the running. The winning suggestion — and several of the finalists — were submitted by Claire Ryan, who lives about a half-mile away on California Ave. Claire explained her suggestions by confessing, “I like puns.”

Kim and Paul Czarnezki are relative newcomers to the Como Park family. They bought their home four years ago because they liked the down-to-earth feel of St. Paul and thought Sam and Max would find it family friendly, too. In addition to the Zoo, Conservatory and park, the family loves the walkability of the neighborhood.

Conscious of environmental health, they have eliminated chemicals and taken steps to encourage a more natural lawn. Kim first added prairie grasses, native plants, and pollinators. Next, she planted colorful perennials on the berm, and plans to plant more next season.

With their Chelsea Heights school online, Sam and Max were feeling a bit isolated last spring, so the family adopted their first dog, Neaveh. Nevvy is a sturdy, 11-year-old mix of shepherd and mutt. She quickly became the most popular member of the family.

Then came The Ant, a conversation starter among the many walkers heading to Como Lake. The purchase was somewhat serendipitous. On her way to visit her parents in northwestern Iowa, Kim stopped to browse Curt Wieneke’s aluminum statues in an outdoor lot in Windom. Given the shopping restrictions of Covid, and Kim’s taste for things playful and unusual, she bought it. No special affinity with ants; she just liked it. And there sits the ant, towering over a recently planted creeping juniper bush.

As for the question most frequently asked by walkers — What is the ant’s name? — the family asked District 10 to help out. We put out a call to community members to brainstorm ideas for a name.